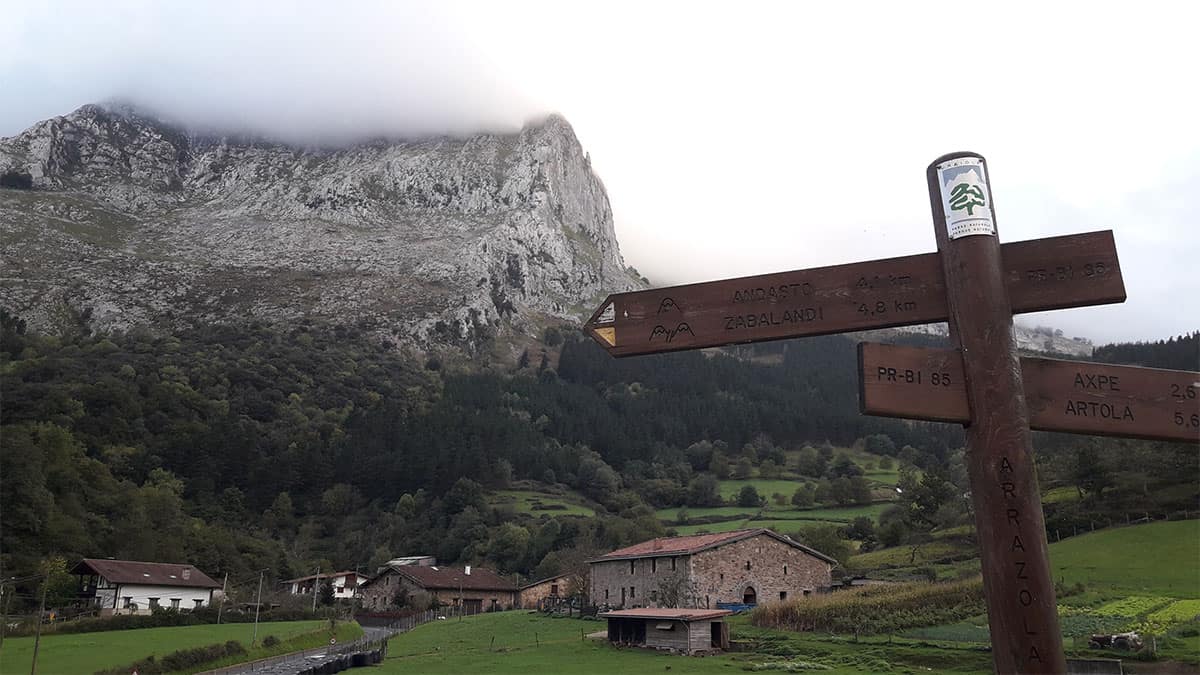 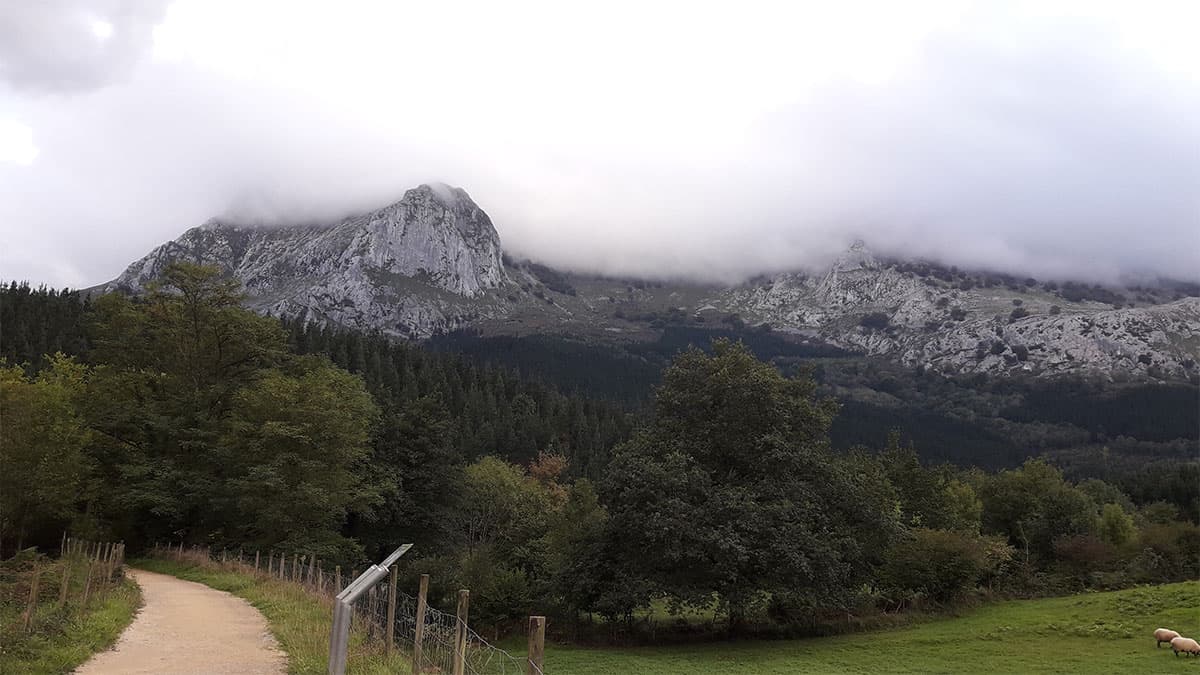 The route starts in the Axpe and Santiago districts, at the crossroads joining both districts. We come across a bus-stop a bare 30m from the starting point. There is a non-adapted information panel at the beginning of the route, which is our starting reference, and is on a barely noticeable downward slope as we head to Atxondo town centre. We come across interesting information regarding cultural, geographical and historical values throughout the route either on panels or posts, none of which are adapted regarding wheelchair access, Braille or QR codes. The route offers benches on the banks of the Arrazola River, rest and/or leisure areas, public WCs and a fountain. Not wheelchair accessible. No access to these places except via the route. At the rest/leisure point, there is the possibility of a bus-stop a mere 30m away with adapted access to the bus-stop. 500m from the end of the route, we can see the town of Atxondo in the background among the numerous forest formations. With 50m left to finish the route we come to a crossroads where the GR 229 continues turning right to finish opposite a bridge, which is our reference point because we have to head to the bridge leaving the GR229 to one side. Once we have crossed the bridge, the route finishes some 15m later. Once inside the town of Atxondo 100m from the route finish line, we find bus-stops on either side of the road.

How to get here

From the Apatamonasterio car park to the Arrazola neighborhood

The Arrazola greenway, located in Atxondo, the old path of the Arrazola railway, runs under the slopes of the emblematic Basque Anboto summit, parallel to the Arrazola river, along the spine of the valley of the same name. This route, formerly used for industrial purposes (mining), is a very simple and gratifying route in which the rural environment is the main protagonist.

The Aurrera steam locomotive was in charge of extracting the mineral from the valley to the urban nucleus of Apatamonasterio, located about 5 kilometers away, a fact that is remembered in the final section by means of a wagon in which the mineral was transported. Currently, the environment has been converted into a leisure area, changing the old railway track for a compacted gravel track that is accompanied by green spaces with tables for eating and all kinds of amenities.

Located in the Atxondo valley, in Bizkaia, the Arrazola greenway is one of the most used family plans by Bizkaians, a very recurrent natural resource, which stands out for its views over the Anboto massif (Urkiola Natural Park) and the rural environment that surrounds you. This Basque area is not without its magic. And it is that, Mount Anboto, is the home of Mari, one of the most important mythological beings of our land. Anbotoko Mari, goddess of nature, a mythological being before the Christian religion, was one of the great mystical icons of the Basques, and still is. A character, who together with the akelarres and the sorginak (witches in Basque), makes us immerse ourselves fully in an epic environment, in a magical environment.
(Turismovasco.com)

Description of the section and its accessibility level

Equipment for receiving the external resource on the section

Is there reception equipment on the section?
No

Are the access slopes suitable for people with reduced mobility?
No
Are there railings and/or handrails?
No

Are the access slopes suitable for people with reduced mobility?
No

Are there personnel trained in accessibility in the facilities?
No

Is there a rest area at the reception?
No

Is there one or more stores at the reception?
No

Is there a children’s area at the reception?
No

Is there an exhibition room at the reception?
No

Is there an exhibition hall at the reception?
No

Are there trails on the section?
Yes

Is there lighting at night?
No
Minimum accessible connection between parking spaces, if any, the start of the obstacle-free trail
Yes
Is there an adequate slope to allow circulation without assistance, with personal assistance or with technical assistance?
Yes, without assistance from third parties
Parking spaces reserved for vehicles used to transport disabled people according to current regulations. At least 5% of the total spaces
Yes
Parking signage, if any, with the International Accessibility Symbol on the floor and/or on walls
Yes
Informative poster at the start of the trail indicating the length, route, difficulty, duration and slopes by sections
Yes
Path start sign positioned no higher than 195cm
Yes

Vertical start signage
Yes
Vertical signage type
Read vertical signage
Compact, non-slip and with no projections along their entire length, allowing wheelchair transit
Yes. Compacted gravel
2 m. paved trails with non-deformable and non-slip material, with a different texture and different from the rest
No
For floors with planks, the spacing between the planks is no more than 1 cm, with occasional narrowings of a maximum of 90 cm
No
The route is more than 150cm wide, with occasional narrowings of 90cm
Yes
Minimum clearance height of 220 cm
Yes
Rest areas
Yes
Urban furniture (fountains, dispensers...) arranged along the pedestrian route to provide sound orientation
No
End vertical signage
Yes. Final vertical read sign.
Guiding partition and/or tactile foot signs to draw attention to an important feature
No
Islands with a minimum width of 150 cm to facilitate two wheelchairs passing each other
No
Is there an adequate slope to allow circulation without assistance, with personal assistance or with technical assistance?
Yes, with no assistance
Unevenness through pedestrian routes
No
Tree branches do not obstruct the route at below 2.20 m
Yes
In botanic gardens, if there are any, Braille signs no higher than 120cm to any accessible communication means
No
Route length dimensions and time
5km one way Duration of the tour 1 hour and 30 minutes

Does the section have a cycle touring lane?
No

Is there a lookout or observatory on the section?
No

Is there a nature classroom on this section?
No

Is there a recreational area on this section?
No

Is there an adequate slope to allow circulation without assistance, with personal assistance or with technical assistance?
No

Is there a beach on this section?
No

There are still no reviews. What are you waiting for to submit your review?

More route in the area

There are many accessible routes and trails to discover and enjoy Bilbao Biscay to the fullest. Spectacular landscapes and natural surroundings that you won't want to miss. 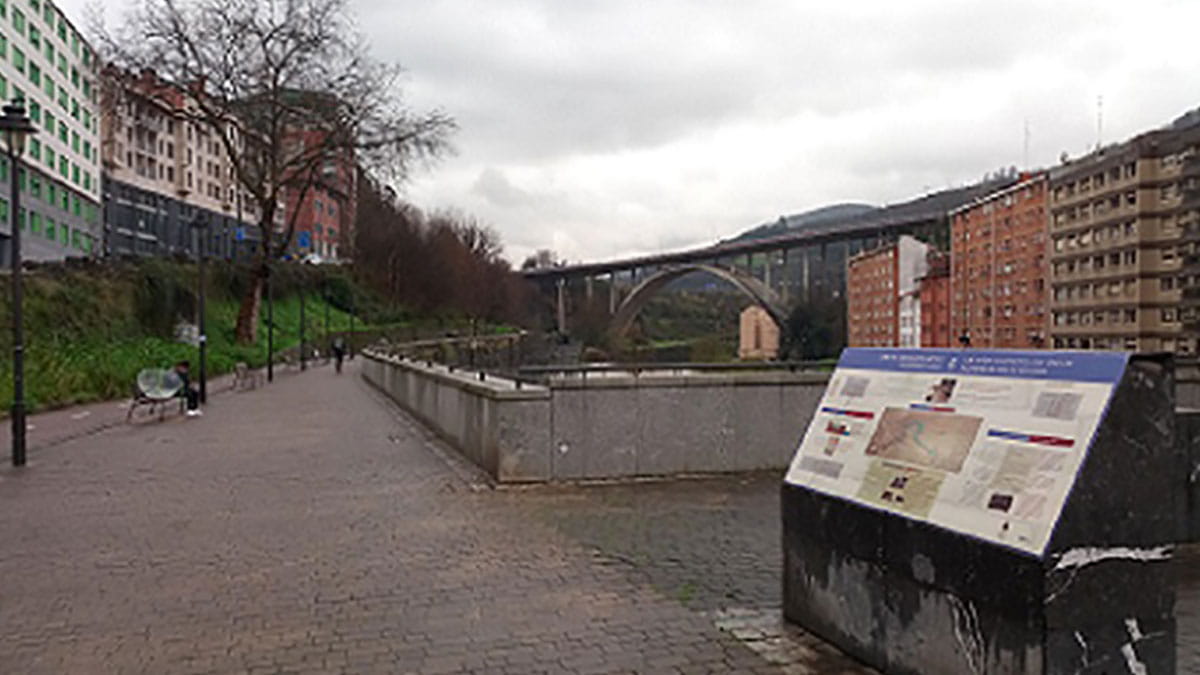 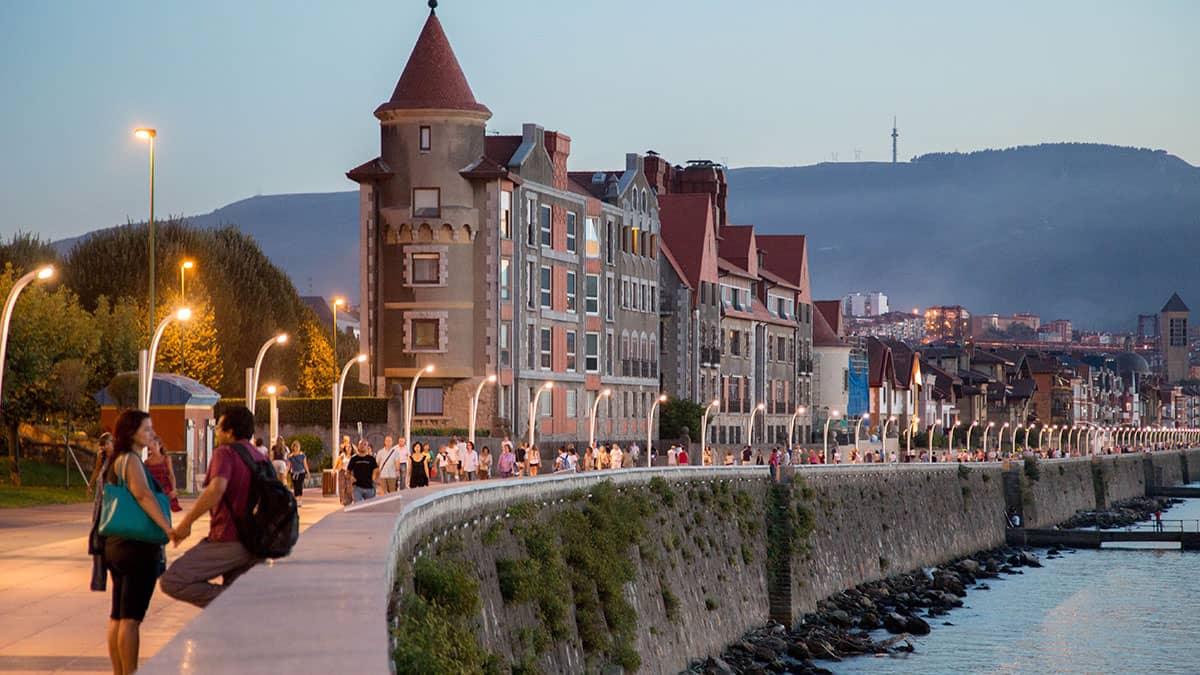 Route - Route of the grand houses in Getxo 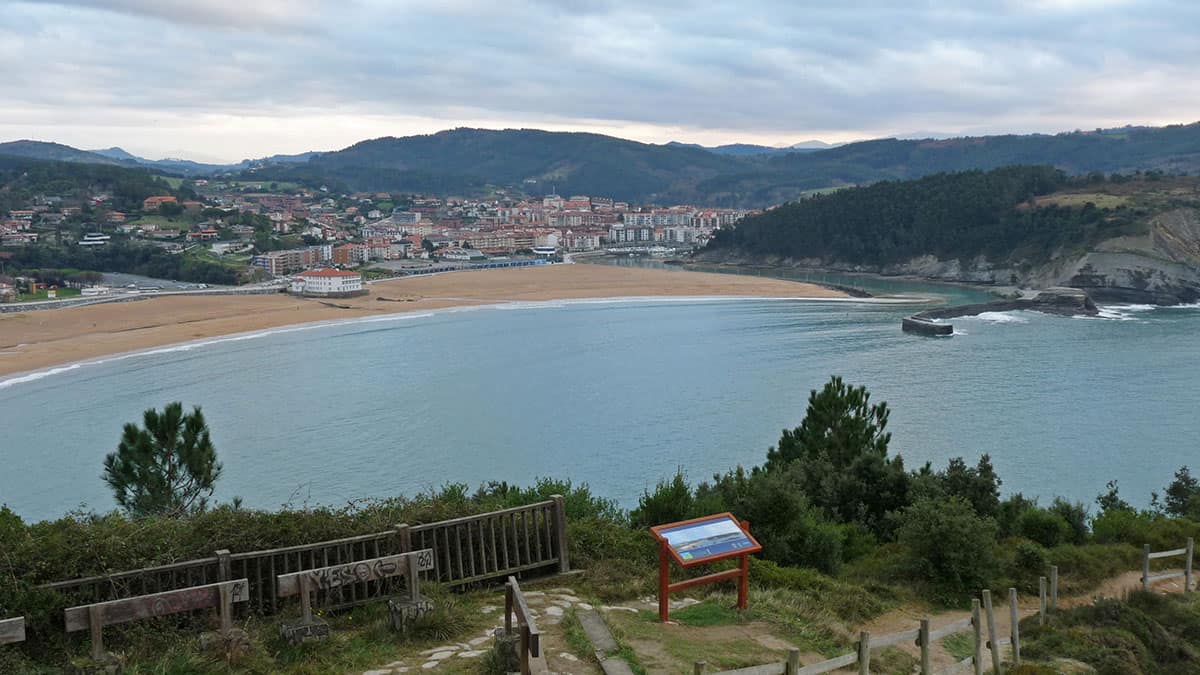 We use proprietary and third-party cookies for analytical and customisation purposes, such as choosing the language in which to display the website. For more information, please consult our COOKIES POLICY.You can accept all cookies by clicking “Accept” or configure/reject the use of cookies CONFIGURE.

We show you hereinbelow the different categories of cookies that our web page uses. You can personalise your choice by accepting or rejecting these categories through the buttons enabled to that end. For more information, consult our COOKIES POLICY